The consumption of wheat in the world is mainly concentrated on the production of baked goods, in which the production of bread accounts for a large proportion. 80% of India's wheat is consumed in the form of processed traditional foods such as chapathi. The increase in whole-grain bread production is due in part to increased demand for high-dietary fiber foods and, on the other hand, lower prices for whole-wheat bread in South Africa. In addition, epidemiological observations have found that in many Western countries, coronary heart disease, diabetes, and several other genetic diseases prevail, and the study of whole wheat bread has received widespread attention. China's bread industry is industrialized towards staple foods, with low fat, organic and nutritious development.

There is still a lot of research work to be done in bread production, such as anti-aging of bread and improvement of organizational structure. The aging of bread can cause serious economic losses, and about $1 billion of baked goods are discarded in the United States each year. In order to occupy a certain market share, this problem must be overcome to extend the shelf life of bread. î€„

Enzymes have been used in baked goods for more than 50 years as a natural dough improver, but their large-scale application has only been realized in recent years due to cost issues. î€ƒ

1.1 The role of amylase in baked goodsî€„

Alpha-amylases are often used with proteases to improve the functional properties of the dough. Wheat and rye flour contain only about 0.5% to 1.0% of fermentable sugars and do not provide the sugar needed for yeast growth. If the activity of the Î±-amylase in the flour is insufficient, the maltose content of the starch decomposition is low, and the dough is not good. Therefore, about 0.3% by weight of malt alpha-amylase or fungal alpha-amylase may be added to the dough to improve the quality of the dough. Fungal Î±-amylase is unstable to heat and easily inactivated during baking. Together with glucoamylase, it can control the content of reducing sugar in products, which in turn affects the quality of products such as color. Alpha-amylase can reduce the viscosity of the product, improve the processing performance of the product, and ultimately make the product soft and bulky. During the baking process, the starch gels and the protein denatures to form a rigid structure and releases water into the starch gel. If the Î±-amylase activity is too high, excessive starch hydrolysis in the early stage of the baking process will result in enhanced bread viscosity and a small volume. The fungal alpha-amylase is inactivated at 75 Â° C, so this does not occur and will extend the shelf life of the bread by a factor of two. S. Sahlstrom et al. studied the effects of the addition of four fungal alpha-amylases in bread making, the time of powdering and the time of proof on the quality and shelf life of bread. The results showed that the addition of enzyme increased the bread volume, but the addition of Î±-amylase did not affect the reduction of milling time and proofing time. Adding Pullulanase can delay the aging of the bread. Alpha-amylase does not hydrolyze intact starch granules. The yeast fermentation process also relies on the reducing sugar produced by the Î²-amylase, which in turn produces a good flavor and color through the Maillard reaction. MarcJ.ECvanderMaarel et al. carried out a detailed study on the properties, three-dimensional structure, catalytic mechanism and application of Î±-amylase. F.Randez-Gil, JAPrieto et al. constructed the Aspegillusoryzae Î±-amylase cDNA under the control of two promoters, SUC2 and ACT1, and then cloned into a baker's yeast strain, and constructed a YIp and free gene YEp plasmid. Alpha-amylase ability to screen for transformants. Francisca Randez-Gil et al. studied and reported the use of recombinant DNA technology to alter the formulation and processing conditions of bread making. The ability of the new baker's yeast to produce gas, pressure, protein and other metabolites improves the flavor, rheological properties and shelf life of the bread. The thermophilic maltogenic amylase in Bacillus affects the rheological properties of the dough and the starch molecules in different ways. This enzyme affects the amount of amylose to obtain monodispersity and maintains the molecular weight, and it is found that the viscosity of the cold dough is related to the maximum amount of amylose molecule polymerization. î€ƒ

1.2 The role of protease in baked goodsî€„

The robust, non-germinated cereal protease activity is usually very low and mostly papain, meaning that proteases are active when there is a substance capable of reducing disulfide bonds. Endogenous proteases have less effect on bread quality because of their higher pentosan content. However, enzymes that hydrolyze gluten have a significant effect on bread quality. For example, the saliva of some insects contains enzymes that hydrolyze the main proteins in the grain, which can cause excessive gluten hydrolysis. The amount of protease is controlled during the bread making process, and the addition of an appropriate amount of fungal protease can shorten the powdering time by 1/3, and the mechanical properties and texture of the dough are also improved. î€ƒ

1.3 The role of hemicellulase in baked goodsî€„

As early as 1973, Casier et al. proposed different types of pentosan in different wheat flours. In general, pentosan has a positive effect on bread volume and dough structure. The pentose contained in rye flour can prevent the formation of gluten, and the partial hydrolysis of these pentosans can significantly improve the processing properties and volume of the dough. Recent studies have found that non-starch polysaccharides play an important role in the bread making process. Hemicellulase and Î²-glucanase can significantly improve the quality of the dough. White flour, whole wheat flour and rye flour contain about 2.5% to 3%, 5% and 8% of hemicellulose, respectively, which play an important role in the water absorption capacity of the dough. Pentosan can absorb 6.5 times its weight of water. î€„

Since the discovery of commercially available xylanases as non-pure products can increase the bread volume and improve the quality of the dough, attention has shifted from the study of enzymes that hydrolyze proteins and starches to the study of hemicellulose and pentosan enzymes. This can be considered a revolution in the history of baking enzyme technology. In recent years, research on the application of hemicellulase, especially pentosanase, in the production of whole wheat bread has become a hot topic. The addition of pentosanase to the dough has been shown to significantly improve the anti-aging ability, and in the production of rye bread, the time of powdering and the energy consumed during the milling process can be reduced. G.Cleemput et al. studied the effects of endogenous non-starch polysaccharide hydrolase on non-starch polysaccharides (NSP) during bread making. The results show that some water-insoluble NSPs are converted to water-soluble during the milling and baking stages. The change in the molecular weight of arabinoxylan during fermentation is partly due to enzymatic hydrolysis. Since it is difficult to extract arabinoxylan from dough or bread, it is indicated that there is an interaction between NSP or NSP with protein or other flour components. It dissolves the gelatinous substance formed by the combination of pentosan and gluten, improving the internal network structure. The lipase prevents the combination of triglyceride and gluten, improves the stability of the dough, and has good operability. The finished bread has better elasticity, larger volume, uniform bread structure and bright color. î€ƒ

1.4 The role of oxidases in baked goods

1.4.1 lipoxygenase and sulfhydryl oxidase. Oxidase plays an important role in the modification of gluten. In the 1920s, lipoxygenase was found in soybeans, which bleached wheat flour. Originally known as carotene oxidase, it was later discovered that this oxidase oxidizes polyunsaturated fatty acids rather than carotenoids. Lipoxygenase has recently been found to affect the properties of dough and is therefore used as a dough improver. Lipoxygenase catalyzes the oxidation of unsaturated fatty acids in flour to form hydroperoxides. Hydroperoxides oxidize sulfhydryl groups (-SH) in protein molecules to form disulfide bridges (-SS-) and induce protein molecules. Polymerization causes the protein molecules to become larger, thereby increasing the agitation endurance of the dough. In addition, lipoxygenase can also whiten the bread. Sulfhydryl oxidase (derived from Aspergillus niger) can be added directly or in combination with glucose oxidase to strengthen gluten. î€ƒ

Glucose oxidase and peroxidase have a significant effect on improving the strength and elasticity of gluten in the flour and improving the overall quality of the flour. It has synergistic effects with other enzyme preparations and additives, and is used for the production of high-gluten flour such as baked bread. At the same time, glucose oxidase, by virtue of its natural and excellent properties, can replace various chemical additives such as potassium bromate, which is listed as a carcinogen by the International Agency for Research on Cancer. î€ƒ

1.5 The role of laccase in baked goodsî€„

Laccase is a glycoprotein. The peptide chain is generally composed of about 500 amino acids. The sugar ligand accounts for 10% to 45% of the entire molecule. The sugar composition includes hexose, glucose, mannose, galactose, fucose, and arabinose. Due to the difference in glycosyl groups in the molecule, the molecular weight of laccase varies greatly from source to source, and even the laccase molecular weight of the same source will be different. Laccase (p-phenol oxidase) is a class of copper-containing polyphenol oxidases that oxidize a large class of substrates including polyphenols, methoxyphenols, and diamine compounds. î€„

Laccase is also used as a dough improver for the main components of flour. When laccase is added to the dough, the dough ingredients are oxidized to increase the bonding between them. Laccase increases dough volume, improves dough structure, increases softness, reduces viscosity, and improves dough processing. Laccase can accelerate the formation of gluten and accelerate the degradation of gluten. Adding ferulic acid can improve the processing properties of the dough. In addition, laccase can reduce the water solubility of arabinoxylan when used alone, and can improve the ability to oxidize sulfhydryl groups when used in combination with ferulic acid. î€ƒ

1.6 The role of glutamine transferase (TGM) in baked goodsî€„

The low extraction rate of flour added TGM viscosity increased by 11%, the volume and fragrance strength increased by 31%, the typical taste substance and solid to bubble volume ratio increased by 25%, the number of bubbles decreased by 17%. For whole wheat flour, amylase and TGM increase dough softness by 16%. JAGerrard et al. believe that the transglutaminase in baked goods may interfere with the prolamin in the dough, producing antigenic determinants associated with abdominal reactions. This possibility needs further study, so it is recommended that no transglutaminase should be added to the baked product. î€ƒ

In recent years, people have been paying more and more attention to the synergistic effect of various enzymes on the quality of dough and bread. Zhou Sumei et al studied pentosanase, glucose oxidase (GOX) and lipoxygenase (active soybean). Powder, SF) on the quality of ordinary powder and special flour bread. Gox and Pentopan have the best improvement effect on ordinary flour bread; SF and Pentopan have the best improvement effect on special powder. Bread storage tests showed that the synergistic effect of pentosanase and oxidase was the best to delay the aging of bread. î€„

Nakai et al. reported the use of maltotriose synthase alone or in combination with glucose oxidase or hemicellulase for bread making. î€ƒ


Black Garlic Powder is extracted from black garlic, it can be used in the production of black garlic cookies, capsule, baked goods, etc. 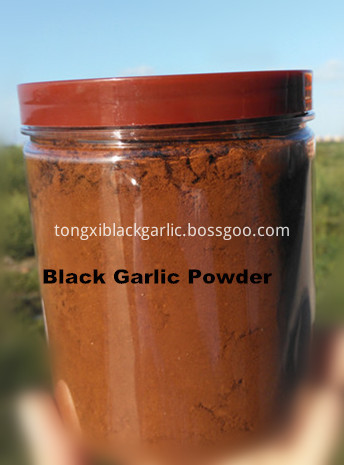